The SilverTowne brand first started as a small coin shop all the way back in 1949 in Indiana. They have grown a lot since then and have become one of the biggest producers of silver bullion in the United States.

SilverTowne is much more than a company that only sells coins, rounds, and bars, but rather they mint and produce their own silver products as well. Since they are headquartered in Indiana it makes them especially unique because they are not in or near any large, major city.

One of the most popular items produced by SilverTowne Mint is their variety of silver logo bars. They produce their bars in a number of different sizes in order to appeal to investors of all sizes. They also specialize in the customization of silver products for any special occasion.

Like we said, SilverTowne is one of the biggest producers of silver bars in the United States, and they produce some of the most attractive bars in the business. The fact that their bars can be found in almost any size makes them able to appeal to to every investor.

Smaller bars, such as the one ounce versions, have more attractive designs featured upon them in an attempt to spur more interest in the bars themselves and make them fly off the shelf faster.

As the bars get larger the designs on them diminish and they grow increasingly plain in appearance. At the end of the day it should not matter what is pictured on the silver bar, because silver bars are not sought after as collectors items like certain coins. Below is the standard 5 oz SilverTowne logo bar: 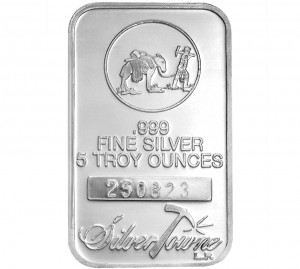 In addition to selling bars, SilverTowne also sells silver coins and rounds in order to complete their offering. Their common bar weights are 1 ozt, 5 ozt, 10 ozt, and 100 ozt.

A premium, when discussed in terms of silver bullion, is the price a company charges over the actual value of the silver in the bar. Obviously, for companies like SilverTowne to ever make money, they need to charge a bit more than the value of the silver because they cannot survive by simply breaking even.

SilverTowne bars are competitively priced with their one ounce bars being only about $3 above spot value (of course this price changes on a frequent basis). As the bars get larger the price over spot per ounce stays fairly constant in and around the $3 range. There are very few places elsewhere on the web that offer such great prices on their silver products. Not only would you be hard-pressed to find bars at a cheaper price, you will also have a difficult time finding bars of this quality for the price.

Where to Buy SilverTowne Products

For the best retail pricing, make sure to check JMBullion.com’s SilverTowne selection. Major dealers are able to purchase SilverTowne product at steep discounts, which they can then pass on to the end customer. JM offers all major SilverTowne branded products, including their Prospector, Eagle, Buffalo, and Poured lines of bars.