Engelhard is an American-based producer of precious metals which was recently purchased by BASF, a German chemical producer. The history of Engelhard goes all the way back to the early 1900s, 1902 to be exact.

In 1902 Charles W Engelhard bought the Charles F Croselmire Company which was located in Newark, New Jersey, and changed the name to American Platinum Works in 1903. Within only a few years the company became the largest producer of platinum, gold, and silver fabricated products in the world.

In 1958, Charles’ son, Charles Jr., changed the name of the company to Engelhard Industries Inc. and it was then a publicly traded company on the NYSE. After Engelhard became public it then bought and claimed stake in a variety of other mineral and chemical companies over the years until Engelhard was eventually bought by a chemical company themselves.

Their bars became popular in the 1970s in light of oil shortges and periods of heavy inflation, but production was stopped entirely in the 1980s.

Engelhard has always been headquartered in various parts of New Jersey, but for the most part has been in Newark and more recently Iselin, New Jersey.

If you know anything about Engelhard you are probably most familiar with their silver bars. The reason for this is that Engelhard has produced bars of every size ranging from as small as 1 ounce to as large as 100 ounces. It would be futile to list all of their bars here, as Engelhard made nearly limitless sizes/types of bars over the years.

Their most popular bars are certainly their 1 oz, 10 oz, and 100 oz silver bars. Below is an example 100 oz Engelhard silver bar: 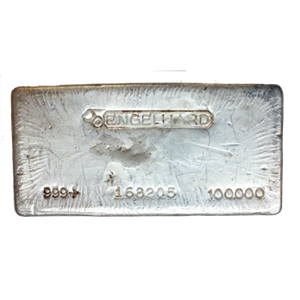 Another feature unique to Engelhard is not only have they produced all sizes of bars, but they have also produced a nearly infinite amount of variations for each size. Most online retailers list dozens of different Engelhard silver bars, as their designs and shapes changed year to year. Certain designs are valued far more than others, while others are more common.

People seek out Engelhard products because they trust a company that has been in the precious metals business for over 100 years. With that being said, Engelhard’s extreme popularity coupled with the fact that they no longer exists as a minting company means that their bars will carry a bit higher of a premium over spot value than a large quantity of other brands of silver bars.

On top of the fact that the silver bars produced by Engelhard are rare, their superb quality makes people want them even more. The premiums are a bit more than other bars, but once you hold and feel an Engelhard silver bar you will understand exactly why. Engelhard bars are also IRA-approved.

Typical premiums for Engelhard bars, excluding the rarest versions, are around $3 over spot for 1 oz bars, and $1.50 over spot for 100 oz bars. Make sure to shop around to find the best prices on Engelhard silver bars.